Have you noticed how people tend to associate themselves with others’ good deeds/intelligence/bravery/creativity and take pride by proxy? David Cameron calling Nelson Mandela ‘Madiba’ is an example. Through use of Mr Mandela’s pet name, Mr Cameron is subconsciously or consciously trying to grab a few rays of Mr Mandela’s glow. Maybe, just maybe, 2014 will be the year our current PM will bring peace, humour and a statesmanlike presence to world politics. And maybe as a nation we can bask in reflected glory. Maybe.

In that spirit, I would like you to know that I had lunch with Kate Humble (BBC TV Naturewatch series) the other day. The Husband and I were heading cross-country on a bit of a pre-Christmas mission. Have you ever broken your journey to partake of a light lunch (The Old Bakehouse, West Linton – very nice) and stumbled across a TV crew and presenters, some dressed as elves and Santas, tucking into a Christmas meal? Surreal as it is, that’s what happened to us. Honest. Someone once suggested that I look a little like Kate (it’s the hair). However, Kate’s petiteness, button nose, and media sparkle are unlikely to rub off on me, despite my name-dropping.

We were en route to Ayrshire to sample the sumptuous delights of Michelin-starred Glenapp Castle. Even more thrilling, we were going to view the Geminids. Those of you who have been caught up by the brilliant news that Northumberland’s own Kielder Observatory and surrounding area have achieved Dark Sky Park status will probably have the gen on the Geminids – a seasonal cascade of meteors, clearly visible to the naked eye during a couple of nights in December. The Husband and I had a hot date with freelance science communicator, writer and astronomer, Steve Owens, and were hoping for a cloudless night – we lucked out. Steve briefed us in the warmth of Glenapp Castle (with the sounds of the meteor shower playing out through an app on his phone!) letting us know we’d probably see fewer meteors than on a clear night. 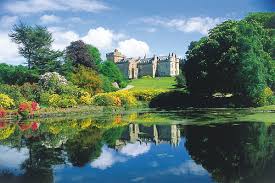 And so it was that we lay trussed up in blankets, atop sun loungers, on the manicured lawns of Glenapp, under the moody Ayrshire sky. We looked like stranded Farne Island seals. It’s hard not to give a football-crowd-type cheer each time you see a trailblazing flash in the sky. We saw 30 or so in a couple of hours. Apologies people of Ayrshire.

Geminids – a photo from National Geographic

So, stargazing looks set to become a new hobby for 2014 – and forms part of The Husband’s birthday surprise (you’ll have to wait and so will he!). Last year we celebrated his rapidly augmenting years with a trip to Edinburgh and I fell into the trap of saying ‘yes’ to a challenge I should have, well, run a mile from. I agreed to do the BUPA Edinburgh Great Winter 5k Fun Run. A friend recently commented that, ‘Fun and run aren’t two words that I’d put together.’ Be that as it may, I have spent the best part of 2013 preparing for this wretched run – three times a week, rain or shine, along river and round coast.

And now the joy is nearly here. Berwick Bloke (a lifeboatman with Berwick RNLI and my challenger) and I will be speeding (or shuffling in my case) our way round Arthur’s Seat on January 11th. We’ll be raising a bit of cash for the fabulous RNLI who risk their lives to look out for those in peril on the sea. After that date I will never have to trot my aged bones up Bankhill again. Yes, 2014 will be the year that I truly give up any attempt to be athletic.And, by association, that means you can too.

POSTSCRIPT: We did it! And actually it was fab. So far we’ve raised around £900 for the excellent RNLI – there’s still time to sponsor so please do consider popping over to my giving page. All contributions – big and small – gratefully received. http://uk.virginmoneygiving.com/JackieKainesLang