Archive for the tag “#wordsinmywindow”

Words in my window: Hope

November’s a funny old month. It feels like the beginning of winter and the end of the year. Which can both be positive or negative things, depending on which way your year has shaken out and how you view the seasons.

With the 100th anniversary of the end of the First World War arriving early in the month, a line from the Wilfred Owen poem ‘Anthem for Doomed Youth’ seemed apposite.

I’ve always found the poem heart-breakingly powerful. A guttural cry against the tragic inhumanity of war. An inhumanity that – in our humanity – we seem incapable of resolving. A paradox illustrated, of course, by the fact that this ‘war to end all wars’ didn’t do the job.

But, the very fact that we continue to anticipate that war will end forever one day is also illustrative of that inescapable human trait: hope.

Or do I mean optimism? One Instagram follower admired the optimism of HOPE/SPRINGS/ETERNAL. Are ‘hope’ and ‘optimism’ the same? There are certainly similarities. The proverb cited in my words derives from the idea that human nature compels us to ‘always find fresh cause for optimism’ (Oxford Dictionary of English, 2010). A few pages later, the OED states that optimism is ‘hopefulness and confidence about the future or the success of something.’ It also highlights Leibniz’s philosophical viewpoint ‘that this world is the best of all possible worlds’ and ‘good must ultimately prevail over evil in the universe.’ Leibniz was born mid-17th century and died in early 18th. His philosophy was ridiculed by many, particularly Voltaire. If you’re interested in that, you’ll find a piece I wrote about Voltaire and the Brexit Referendum 2016 here.

All this seemed to lead into the idea of individuals being works in progress which, to me, suggested that we start from a point of potential… I had intended ON A BLANK CANVAS but I was short of Ns. Sometimes the letters lead to a better phrase and, actually, I prefer the more humanised: 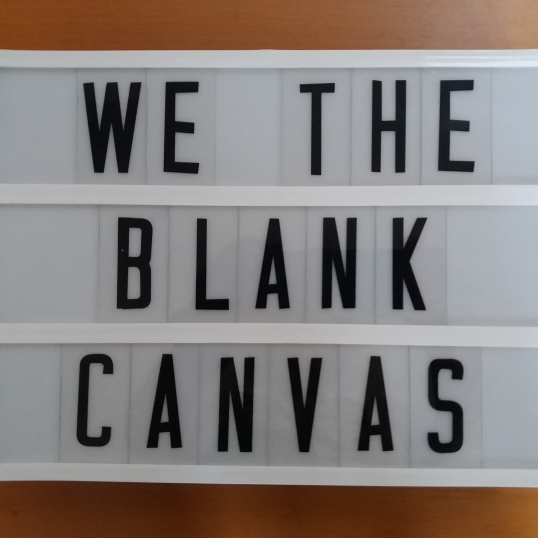 Although, as some artist friends pointed out on Instagram, this blankness would be sorted with some of their handcrafted tubes of oil paint! If you’re interested, just pop over to Foldyard here in Berwick on Bridge Street.

And so to the end of the month and what has become a hope trope! This time ‘hope’ with a different emphasis.

This seemed to resonate with people. Friends on Instagram and Facebook responded to HOPE/IS/A GIFT with affirmations: ‘Yes – absolutely’, ‘Indeed’. And with assertions: ‘A necessity’, ‘(a gift) that must be shared’, ‘ (a gift)…that is well grounded in God’s promises‘, ‘From God given to us in our Saviour Jesus Christ’.

Even as I write, the vote on the Brexit deal in Parliament has been postponed – having been set to go ahead as recently as this morning! We live in strange times. Whichever way your politics swing, and whatever your thoughts on Brexit, it is all very unsettling. All very ‘uncharted territory’ as Theresa May might say. However, that’s to suggest that we are or have been in ‘charted’ territory.

And so, fittingly, and somewhat unexpectedly, December has arrived and I am about to complete 52 weeks of placing different phrases in my front window.

Since I won’t be writing a post until 2019, I’d like to wish you a peaceful Christmas and a hopeful New Year – and to leave you with this week’s #wordsinmywindow:

Words in my window: two for the price of one!

A Better Hospital for Berwick, unity and dissonance, Halloween, Cancer and Cards Against Humanity all feature in September and October

I feel as if I may crash and burn. I aimed to have different words in my window each week for a year. I have managed that. Just. But I also thought I’d blog about them – not so much to search for meaning but to reflect on the meanings they conjured for myself and others. I have managed that each month. Just. Until now. So it’s two for the price of one.

Look, September and October have been fiercely busy. Perhaps the most important and mind-consuming thing has been the campaign: ‘A Better Hospital for Berwick’. This fight (and, actually, it is a fight) to ensure that our community’s hospital and essential facilities are not quietly shrunk away is stomach-clenchingly real. The idea that a whole population might be left vulnerable and isolated because of laziness and a focus on financial savings rather than on the realities of life lived and the inescapable fact of being over 60 slow, undualled miles from the nearest acute health facilities, is totally compelling. For me, it has been a wake-up call about the NHS. The NHS is not what it was. Like our hospital in Berwick, it’s been disappeared while we weren’t watching – actually, while we were watching thinking someone was fighting our corner and had our best interests at heart. We were wrong. You can read more about the Berwick hospital campaign and my views on the NHS here.

Inevitably my passion for this campaign infected my words in September: STAND/AND/BE was followed NO/MATTER/WHAT.

The Husband suggests that the final week of October also sits with September’s passionate scream for compassion and an NHS that remains national and inclusive:

Next up was LIFT/UP/YOVR (I ran out of Us). In some ways, I was thinking spiritually as one FB friend suggested when he cited some liturgy:

“Lift up your hearts”

“We lift them to the Lord”

And so to voices of a different kind. Whilst some saw pragmatic references such as THIS/IS/YOUR ‘last day of the working week’, my brother saw ‘birthday’. And, yes, it was the now 17-year-old’s birthday in that week and she had said: ‘it had better be about me’. What mother could refuse? Happy birthday to you!

CHOOSE/WORDS/WITH ‘enough letters to fit the light box’ said one friend. Correct. However, these last words of September generated the most (I think) polarised responses. From ‘passion’ to ‘an etymologist’, from ‘caution’ to ‘the letters you have available’, from ‘your window messages are perfect for a game of cards against humanity’ to ‘kindness’, ‘wisdom’ and ‘care’.

Talking of letters available, HELLO/MEllOW/FRUIT was called out for its hint of catty sounds (due to a lack of Ls) rather than its Autumnal references.

Did I say it’s been busy? As many readers will know, back in October 2015, I was diagnosed with bowel cancer. It’s been a pretty weird three years. At times I felt my life was on hold or that I was waiting for it to be over. Sometimes I expected to wake up knowing who I was when the whole cancer thing stopped. But it hasn’t stopped. It doesn’t stop. It’s always with you. Your shadow. Your possible nemesis. Your companion. It’s not necessarily heavy and life-draining. Sometimes it’s just there. Sometimes it makes you lethargic. And sometimes it manifests itself in an urge to grab life by the balls.

So, I’m currently doing a course at Edinburgh University which is fascinating but demanding. It’s called Between Counselling & Research – a title too long to feature in my window but certainly enigmatic enough. Trust me, it makes my brain hurt. I’ve also started a new job as a part-time Community Fundraiser in Berwick for HospiceCare North Northumberland –  find out more about that here.

So, maybe TURN/BACK/THE was more about tides than clocks for me. For someone else it was: ‘Once upon a time I wouldn’t change anything but now.’ For one person it was: ‘Oh yes please! Turn it back to pre-June 2016’ (a pre-BREXIT ref). My Cards Against Humanity pal found plenty in his pack: ‘Unfathomable stupidity’, ‘Insatiable bloodlust’ and ‘Wearing an octopus for a hat’. Whilst ‘sheets’ and ‘curtain’ are both practical ideas, ‘EHT’ wins the prize. 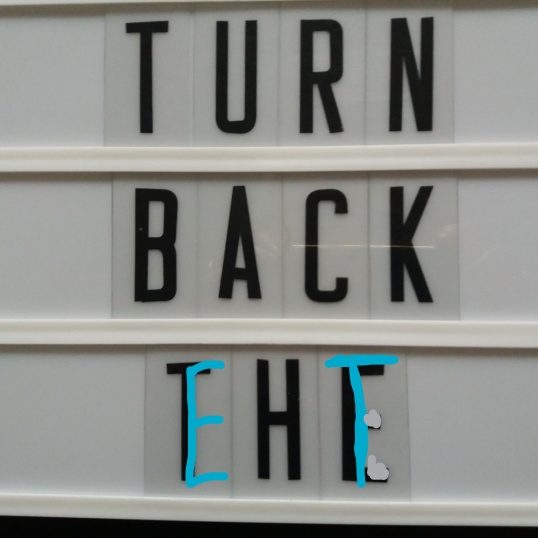 Oh, and who decided that there was a Halloween week? Ridiculous.

Words in my window: August 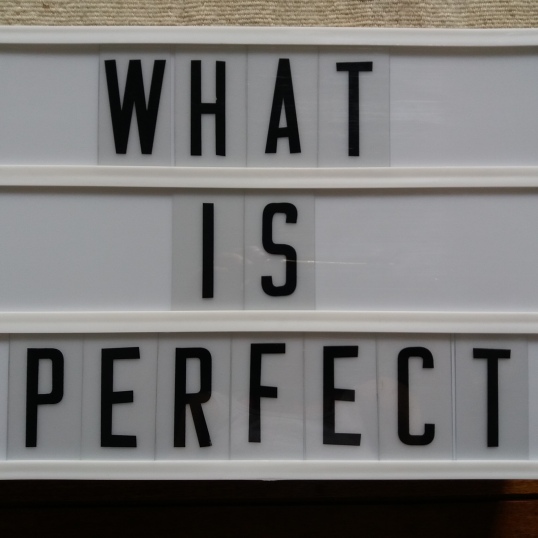 So said my brother. And, as ever, he’s right. Maybe with his picture of an underbaked cake he intuitively realised I was alluding to the thing that so often stalls progress and stymies action: PERFECTION. How many people want to do things but never do because they fear they won’t be good enough (I know I do)? How many people enjoy a slightly underbaked cake with a slightly gooey centre (I know I do)?  Exactly.

Linked to this is a thought which cropped up when I was chatting with someone who’d recently been dealing with cancer. We agreed that cancer and such life-shortening and life-inhibiting illnesses change your perspective on life. ‘Don’t put off joy,’ said my friend. She didn’t mean get out there and do what you want to do, no matter the consequences. She meant don’t forget to pause and take pleasure in the here and now. The gift of the moment, if you like. 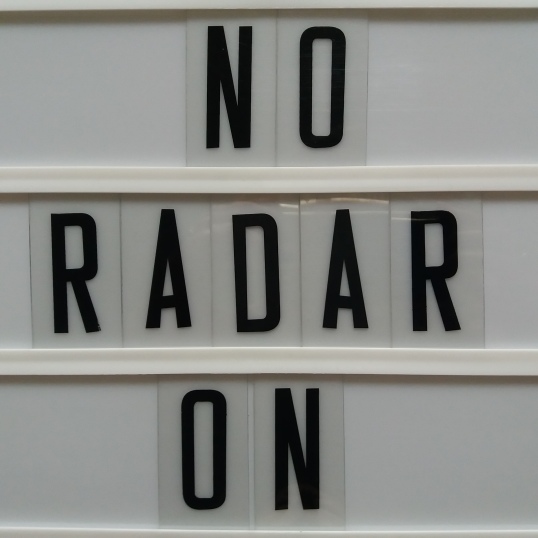 I had thought about NO/FLIES/ON as in ‘no flies on him/her’ for this week. But, as I fiddled with my letters, I realised how delightful it would be (for me!) to create a palindrome and see if anyone noticed. Of course they did! Someone also spotted ‘stealth’ in these words – whether sinister or comforting, predatory or protective, I don’t know.

It’s a strange thing with these words and the lack of punctuation. SO/LONG HOT/DAYS could easily be read as ‘So, long hot days…’ However, the clouds were gathering in late August and most people responded with teary emojis (although my friend the anagram hunter came up with ‘Solo thong days’ – which sound a tad lonely!).

I had intended ‘Define kindness please’ for the last week in August. However it’s really hard to fit eight letters on a line of my box. Anyway, DEFINE/KIND/PLEASE is more enigmatic – indeed one person pointed out that it could refer to the species humankind as well as to a characteristic. However, most people went with the characteristic. The idea that kindness is  ‘not causing harm’ came up as did the, to me, more proactive ‘show it’. Perhaps my favourite response was ‘I see you’, with it’s suggestion of real interaction and understanding. To me, ‘I see you’ holds a promise that is linked to the ‘don’t postpone joy’ comment at the beginning of this piece: KIND/KINDNESS is a gift which we have the power to share with others in any given moment of time.

Of course, in a different context, ‘I see you’ might have altogether more sinister overtones. Fortunately my radar in my words earlier in the month was not on!

I leave you with a picture of my family enjoying perfection in the rock pools of Spittal over the other side of the Tweed from Berwick. 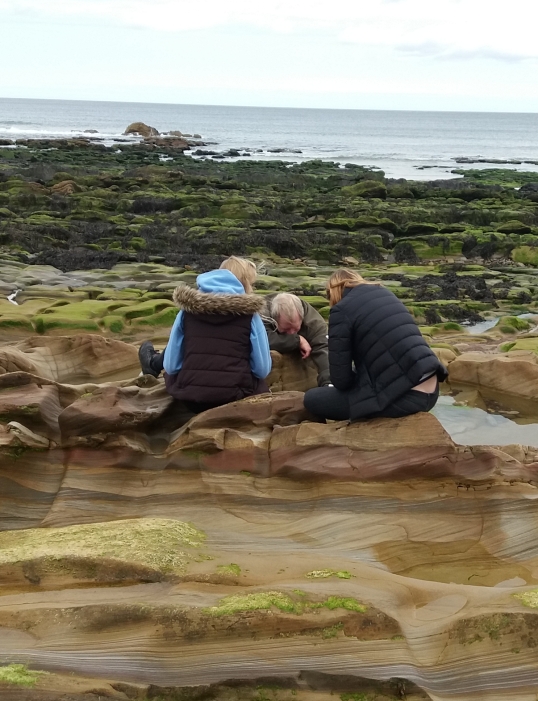