Archive for the tag “Theatre”

As we’re approaching Christmas I thought I’d partake in that age-old tradition of ‘looking back’. It doesn’t matter how old or young you are, looking back –  whether with a sense of yearning, a frisson of shame, or a wry smile – is an inevitable pastime. So, in this festive season, bear with me as I glance back over my musings in this column during 2012.

In January my post-holiday glow, gave me cause to celebrate the plethora of events and functions in and around Berwick. Many still to come this year – from the Dickensian Market (9th December), to the Spittal torchlit parade (December 14th), complete with camels this time! I gave three cheers for the pioneering spirit that ensures that treasured traditions continue and new things are thrown into the ring; the lights on the Royal Border Bridge, now fully functioning and gorgeous; and the colours of the King’s Own Scottish Borderers, which, come August 1st 2013, will hopefully be central to a thrill-a-minute civic week.

February was the month when Scottish independence and broody hens made curious nest fellows. With a referendum due in 2014, Berwick’s claim as the Monaco of the North needs to be shouted loud and proud. As for hens, I managed to pop fertilised eggs under our broody hen who, miraculously, hatched two gorgeously cute chicks. One is now the noisiest cockerel in Berwick.

The chicks. One is now the noisiest cockerel in Berwick

The inescapable inability to keep New Year’s resolutions slapped me reproachfully in the face in March. But, happily, so did the beauty of the surrounding countryside as charity and exercise collided in the form of training for the Edinburgh MoonWalk.

Mary Portas fever hit in April as the first-round bid for funding gripped the town. As in so many things in life, success came second time around. Hopefully uniting behind a coherent vision for Berwick will follow seamlessly.

By May training fatigue plagued me as did fury at the amount of litter that people insist on dumping – particularly from cars. June brought a train timetabling rant after a five-hour journey twice took eight hours – I am fearful that East Coast Mainline’s habit of dropping Berwick from key routes to regain time might mark the whittling away of what has been a fantastic London and southeast-bound service. 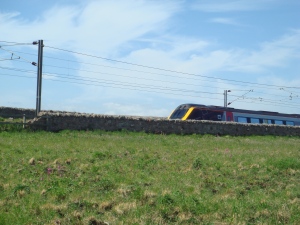 Will Berwick’s train service be whittled away as trains sail straight through our station to save precious minutes?

In July, following on from June’s Jubilee and Olympic fervour, I celebrated Berwick’s ability to lay on a jolly good day out. I hoped – and still do – that we might become a renowned town of festivals.

August was a month off for me – but the people of Berwick continued to plan, party and campaign – notably in the march to keep Berwick’s Maternity Unit open.

September: two more festivals! The Food Festival and Film & Media Arts. Plus October’s all-new Frontier Music Festival. All fabulous. All attracting a wide variety of people to Berwick. All back in 2013.

Change and its challenges were hot topics in October – brought on by our own lengthy building works and the many positive plans being hatched for Berwick. Deep down I know we are doing the right thing in updating and modernising our home – but the process is not always easy or without conflict. This, I mused, is a bit like keeping up the momentum for change in Berwick.

I wafted (rather bravely I thought) into windpower in November. Another brave move for me was appearing at the marvellous Maltings in Calendar Girls. Having marched round Edinburgh in my bra for breast cancer, it seemed only fair to walk the boards in – well, not much really – for Leukaemia and Lymphoma research.

I have had a fabulous year in Beautiful Berwick – thank you for letting me share some of it with you. And, as the windmill might say to its sails: ‘What goes round, comes round.’ So, Merry Christmas and a Happy New Year!

In praise of civic pride – and a pioneering spirit

I’ve said it before and I’ll say it again. I blooming love Berwick. I really do. No, I haven’t knocked back too much egg nog. And, no, the shorter days have not made me take leave of my senses.

So what has caused this surge of civic pride? Well, there’s something about Christmas in Berwick – and something about this winter in particular. Last winter was marked by the great snow–in – and an almost biblical rush of neighbourliness, good deeds, and bonhomie in the face of icy adversity.

This winter the Christmas trees around Berwick town centre have stood proud and glorious – albeit slightly askew after a battering by the 100mph winds. In fact, the 10–Year–Old asked in awe, “How many Christmas trees does Berwick need?” I felt a shiver of delight that our town can impress her with its largesse. The festive lights have looked gorgeous, merry and welcoming on the Royal Tweed Bridge, along Castlegate, Bridge Street and on the high street itself – not to mention the glorious sky carpet on West Street. And, unlike London’s West End, not a sell–out sponsorship deal in sight – just an appreciative doff of the hat to the Rotary Club and the town council.

But it’s more than just lights, isn’t it? It’s the healthy optimistic glow that illuminates the positive: that shines out despite the lack of money, the unpredictable weather, the potential for things to go wrong, and the not always helpful hand of the Morpeth Moguls – and proclaims that we won’t be doom mongers; we can and will make something special of our town.

It’s the campaign to bring the colours of the King’s Own Scottish Borderers home to the Barracks  – and the wider issue of keeping the Barracks functioning as a museum implicit in that campaign. It’s Miles Gregory standing up at his farewell bash at the Maltings and acknowledging that a vibrant centre for the arts is not just a success story for him and his team – it’s another notch on the belt of civic pride for Berwick, something we can all be proud of. It’s the marvellous Dickensian Market attracting more people to the town than ever – and encouraging people to dress up in mad costumes, have fun, and spend money at the same time.

It’s the Berwick Male Voice Choir singing proudly and loudly at St Andrew’s Church accompanied by a choir from a local school – and successfully pulling off a repertoire that included Bridge over Troubled Water, Pirate songs, and Morte Criste.  It’s the slightly barmy Santa and his Reindeer parade in Spittal – with the mellifluous Norham Village Band playing carols bravely in amongst the stalls of local festive produce. And, while we’re at it, it’s having a local newspaper which gets along to all these events, writes supportively about them and takes pride in being part of the local colour and culture. It’s even the still only part–functioning lights on the Royal Border Bridge.

Because all these things – and the many other amazing events and functions during this season and throughout the year are often testament to the vision of one or two people and the hard labour of a good team – and none of them is perfect. We can all look at them and see how they could be better organised, better publicised, more dynamic, more textbook. But in this season of good cheer, and at the beginning of a brand new year, let’s not knock – let’s celebrate and remember how much duller Berwick would be without them. Personally I am thrilled to be part of a community that’s brave enough to try things out – to campaign, to work together and to love its town enough to want others to see it at its best and to love it too.

Adopting a new home is a bit like having a child. Depending on your audience, you are either incredibly defensive or downright moany about it. That’s a bit how we’ve been about Berwick since moving here from North London.

Some things we have been defensive about – particularly to London friends – are:

Culture… They say: ‘But what about art galleries/theatres/live music etc etc?’  We say: Our own much–loved Maltings  provides an astonishing wealth and diversity of locally and nationally (and some internationally) sourced entertainment, music and culture a step away from our front door. My own highlight of the year was the outdoor performance of A Midsummer Night’s Dream. Not only did we have a most entertaining family debate (triggered by The Nine–Year–Old) about our top three flavours of crisps(mine resolutely cheese and onion, The Husband probably any flavour, The Nine–Year–Old smoky bacon, salt and vinegar, roast chicken – she’ll grow out of it) but also the Lord Chamberlain’s Men gave a fast–moving performance with no boring bits or tiresome over–the–top innuendo and really helped make sense of Shakespeare as originally acted by all–male casts.

AND we’ve been to several gigs in Edinburgh and, last week, visited The Sage Gateshead. Parking has been straightforward and cheap – free in Edinburgh – and right outside the venues. Hack that you Londoners as you wrestle with tube trains, parking attendants and the Congestion Charge and still have to walk miles to get to the gig. ALSO, Northumberland and the Borders probably have the highest population of artists in the country. With many Open Studios and art trails happening right now, it’s the perfect time to get soaking up the Northumberland/Borders Scene – Hoxton eat your heart out!

Looking out from Lindisfarne

Restaurants…They say: ‘Where will you eat?’ I am almost speechless. Northumberland = fresh. Fresh seafood, fresh meat, fresh vegetables. Cooking at home is bliss with such ingredients – as is shopping for them and there’s no wince–inducing price mark–up like you’d find in London’s Borough Market. We’ve had great fun and some delicious meals in and around Berwick.  Favourite moments so far include purchasing crab from the guys over at the Berwick Shellfish Co and sharing the resultant crab feast in our garden with friends; driving out to Ross Farm with The Nine–Year–Old and London Daughter (who was visiting) for Lindisfarne Oysters  – and the three of us slurping them straight from the shells as I opened them over the sink; watching a pig carcass being jointed at Peelham Farm, Foulden and learning how different English butchery is to Italian; marvellous venison at the Queen’s Head; illicitly snatched tasty, lazy lunches at The Maltings Kitchen enhanced by the marvellous view; happy times and relaxed meals of creative home–cooked food at Café Curio – all three in Berwick; and, slightly further afield, The Allanton Inn‘s subtle and delicious in–house smoked fish and meats. No wonder I’m looking forward to the Berwick Food Festival in September. 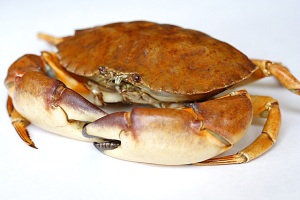 People…They say: ‘Who on earth will you hang out with?’ This casual London–centric view that the only interesting people on earth are found in London would be totally exasperating if it weren’t so risible. I say just read the paragraphs above to get a taste of some of the creative and entrepreneurial people we get to chew the fat with.

The Weather…They say: ‘It’s so cold oop North’. Pah! The Husband (who has bona fide anorak qualifications in a range of things including trains and statistics) says: ‘It’s only ever a couple of degrees cooler in Berwick than London.’ This, he says, is, ‘pleasingly refreshing in the summer months.’ And, ‘we have real winters like we used to have down South in the 50s.’ He also asserts that there’s hardly a raindrop of difference between here and London. So, my London friends, pop that on your trendy wood burning stoves and smoke it!

Now for the moans…Ah, shame, I seem to have run out of space. Moaning about Berwick will have to wait for another column – perhaps a London one!

(A version of this article was first published on August 4th  in The Berwick Advertiser www.berwick-advertiser.co.uk)