Archive for the tag “quilt art”

It’s a rare thing to meet people who are grounded in time, space and environment. But Pauline Burbidge (textile artist, quiltmaker and designer exhibited worldwide, including London’s V&A) and Charlie Poulsen (specialist in sculpture, growing sculpture, drawing) are rather like their respective art works. That is, inspired by and intertwined with the local landscape and its ambience. Charlie and Pauline have created a studio, home and gardens in Allanton near Duns that are an extension of their way of life. A place that breathes vitality, originality and joyful quirkiness. 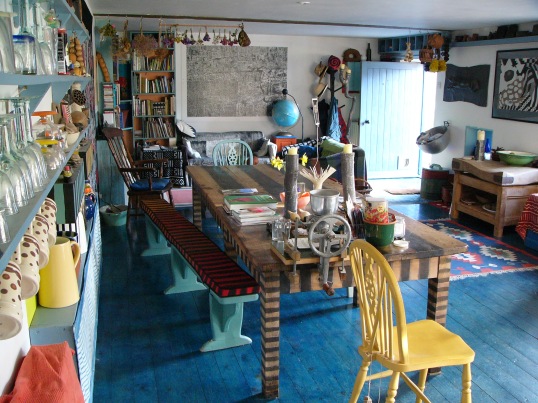 Charlie is my husband’s stepbrother so I knew the couple were artists. However, it wasn’t until I met them eight years ago, that I began to grasp what that means. Even then I was naïve. I was beguiled by their clothes – a collision of the practical (overalls) with the hippy-cum-homespun (knitted waistcoats, printed scarves); enthralled by their home – painted wooden floors, bunches of herbs hung artlessly but precisely, Kilner jars glistening with preserves, upcycled Marmite jars, feathers here, a bowl of stripy stones there – like a perfectly organised version of Kim’s game; and entranced by the garden – fronds of sculpted and entwined branches guiding you round beds of flowers and vegetables growing to the right height and in the right direction. And, yes, I was wooed into thinking that this kind of stylish artistry is, well, easy, for artists. Of course, generally, artists work incredibly hard, create beautiful stuff, and just about scrape by. Pauline confirms this, “Survival can be quite hard. Being a couple, we can be supportive of one another – we keep separate pots of money so we can borrow from each other from time to time.” Charlie owns up to being in debt at the moment, “You’ve got to keep your costs right down. If you don’t spend, you have all that free time to do the work you want to do.”

Charlie and Pauline came north from Nottingham (where they met, married and, until 1993, worked) searching for a property to make the most of Charlie’s small inheritance from his brother. Most people would have balked at the slightly dilapidated group of house-less farm buildings. Pauline says, “We knew within 15 minutes of arriving at Allanbank Mill Steading, this was it!”  Ten years passed in a whirl of camping on mattresses, developing studio and exhibition space, creating a home, producing work, and taking on supplementary jobs here and there to keep financially afloat.

From the start, the yearly Open Studio was at the heart of the Allanbank Mill Steading ethos. “We came up with the idea as a way of letting people view our work and see it in the place it was made,” says Charlie. “Being in a rural location, we felt we needed buyers to come to us, particularly as my sculpture is heavy and difficult to move. The first Open Studio in September 1994 was a fairly basic affair but we attracted a surprising number of mainly local people.  However, we made more money on donations for the tea, coffee and home-made cakes than on the artwork!”

The garden (above and below) featuring some of Charlie’s sculptures in lead and living sculptures and a Nigel Ross sculpture in wood (foreground below). 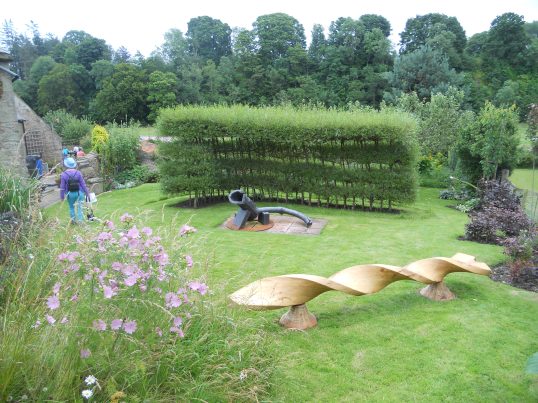 Since 1999, Open Studio has featured the work of a guest artist each year – including architecture, furniture, ceramics, glass, photography and much more. Last year local artist Olivia Lomenech Gill (who has illustrated for War Horse author Michael Morpurgo) was there. This year it’s the turn of Halima Cassell and her carved ceramics. Open Studio now attracts some 500 visitors over four days. It is 21 years since Charlie and Pauline conceived Open Studio and the on-going renovation of Allanbank Mill. To mark the anniversary, they have published a vibrant visual feast of a book printed in Berwick by Martins. It’s a celebration of their life environment and a taster of their work – from Charlie’s epic growing sculpture (400m long and 150m wide) on the Southern Upland Way and playful, thought-provoking ‘ghost’ sculptures in lead and concrete; to Pauline’s stitch art and quiltscapes that hum with the colours, light and rhythms of places such as Holy Island Causeway, Pittenweem, and Puglia in Italy. The best way to appreciate this generous life-affirming couple’s work is, of course, in situ. And you can do that during their Open Studio 2014 from 1st – 4th August and at other times by invitation or appointment (details below).