Archive for the tag “maps”

Training to walk: a blueprint for life

Sometimes I wish there were a route finder for life. Something small and neat that you could whip out of your pocket at key moments. It would be so much easier to make choices if you knew where they would lead, how they would work out, and how long the ramifications would last.

Perhaps that’s why giving and taking things up at New Year is so popular. After all, how dangerous or hard could it be to commit to regular exercise, or lowering your alcohol intake, or phoning your mum weekly for 365/6 days? I read somewhere that almost half Americans make New Year’s resolutions but only 10% keep them. Hats off to the 10% – I don’t think I’ve ever made it through February.

With my lack of persistence in mind, I decided to set two goals for the year, one of which will take me through the first six months and then, hopefully, continue in some form for the remaining six. I’ve signed up for the Edinburgh MoonWalk in June. It’s organised by Walk the Walk, a charity raising awareness and funds for breast cancer. London Daughter and I did the London version eight years ago (we had a little reunion to enjoy the night walk supporting Hospice Care Northumberland in Berwick in 2010). The MoonWalk is a gruelling 26.2 miles starting at midnight and finishing as soon as your little legs can carry you round the circuit. The hallmark is that everyone wears decorated bras as they power–walk. That, and people’s stories – perhaps a date and name on a bare midriff remembering a loved one, or a simple one word status, ‘clear’ or ‘survived’ – marks this event out for me.

Entering the  MoonWalk is not entirely altruistic on my part. You need to train for it. Since we moved up to the great outdoors from London, I have found it harder to exercise. It’s a funny thing but, now we have walks and walking on our doorstep, we do less of it. In London walks of reasonable length were more easily incorporated into everyday life. Walks to the bus stop, tube, shops or park. When we first moved to Berwick, each day was an opportunity to walk the town’s walls, or the shore, or along the river. Taking time out to walk and enjoy our beautiful surroundings was justifiable as part of our moving process. 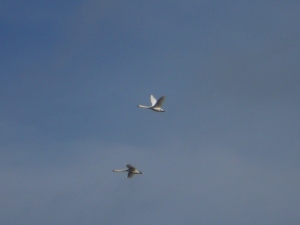 Swans – the only wildlife I was quick enough to capture on camera on a recent walk in Paxton – the oyster catchers and yellow hammers eluded me.

Walking is a time consuming pursuit and, 18 months on, it seems self–indulgent to simply ‘go for a walk’. Several people have suggested a dog. Well, The 10–Year–Old would burst with joy and The Husband would leave. Anyhow, isn’t it daft to feel one has to justify an activity by creating a new one? And there’s the poo. So, moving swiftly on… 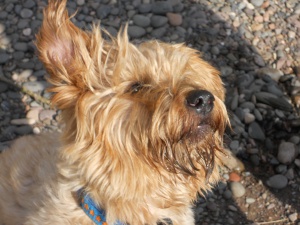 Since fast walking is my exercise of choice, my prevarication about ‘going for a walk’ has proved fatal to my waistline and general wellbeing. So I figured that walking a marathon would galvanise me to action. My new Paxton Friend and I are quartering Berwick and Paxton, chatting as we go.  We try to push ourselves a bit more each time – faster and further.We both walk alone too (Paxton Friend has a dog) – and agree that we feel perfectly safe doing so. Although walking at night is a different matter and one we will have to address if we’re to continue to train effectively. Funnily enough, lone London night walking feels less exposed if you pick your circuit well.

And that’s one of a number of things I’ve discovered about resolutions and ambitions through my training so far. A realistic plan and good support are key to making progress and keeping engaged. And plotting and planning routes is fundamental to not getting lost – confirmed by a Saturday morning spent roaming around the cliff tops looking for the coastal path between Berwick and Beal. Of course there’s a map. And next time – I’ll take it with me! 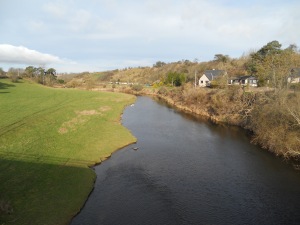 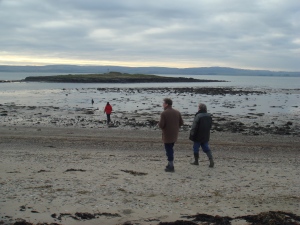 Do take a look at The Barn at Beal.