The past can be a welcome surprise

When I was little and we all had scrapbooks My Dear Old Ma wrote in mine ‘Times change and we with time but not in ways of friendship.’ My 11-year-old self walked a bit taller because it felt like a grown-up interaction with my mum. Later I saw it as sentimental. Friendships do shift and change with the ebb and flow of life – as do so many other things. We look back and think, ‘That wasn’t for ever after all’ or ‘I didn’t expect that to happen!’

Four years ago, I did not expect to be writing a column for my local paper. I did not imagine I’d be presenting a show on a community radio station (Lionheart, Alnwick), or that I’d jog to Berwick lighthouse, marvelling at the swallows swooping by my feet, and feeling as if I could run across the steely summer sea to Holy Island. I did not anticipate that the 11-year-old’s long-held wish to be a market trader would be granted – courtesy of a nudge from the Town Team and some parental support on the baking front. 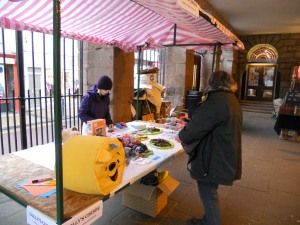 A new entrepreneur in the making at Berwick Market

I certainly would not have imagined myself at a seminar on heritage initiatives in Berwick. But a couple of weeks ago, I was. We’d been invited because we were beneficiaries of a Conservation Area Partnership Scheme grant. It enabled us to replace and repair stone and pipework at the front of our house.

At the beginning of our building project the planning and conservation people seemed, if I’m honest, mildly intrusive and annoying. We wanted to haul our listed house into the era of modern living and they smiled knowingly, shaking their heads when we suggested moving this window and opening out that doorway.  However, in the end, we are pleased with the input we received – even though it scuppered some of what we’d intended to do. Fact is, we have a better, more coherent and pleasing end product than if we’d been left to our own devices. And I didn’t expect to say that! 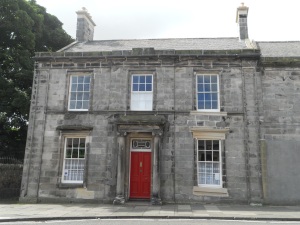 THI grants have enhanced the look of many buildings on Castlegate, Berwick. Including our own.

I had not realised the wider implications of the number of regeneration schemes that have cleverly converged on the town. The Berwick Historic Area Improvement Scheme is a catchall for grants received from the Heritage Lottery Fund’s Townscape Heritage Initiative, One North East, and English Heritage (plus contributions from County and Town Council and business and home owners). It’s all managed by a project officer (funded by a separate grant). And different projects are happening simultaneously around town – including Castlegate, Bridge Street and, the final hoorah, the restoration of the Cowe buildings (purchased by Arch, the organisation established by County to stimulate regeneration in Northumberland). It equals some £3m pumped into the fabric of the town. That’s on top of vanguard project, Dewar’s Lane Granary (£4.7m), and plus the current Berwick Parks Project (approx. £1m), which could be viewed as a spin-off from these successes.

The Barrels pub and the former Cowes buildings on Bridge Street, Berwick  – both being given a facelift with grant monies. 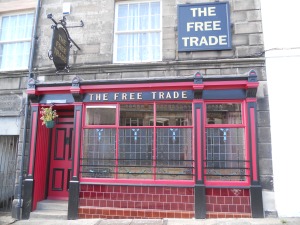 The Free Trade public house on Castlegate – surely not a facelift too far?

Of course, infrastructure projects may seem highfalutin and insanely pointless when people are scrabbling to make ends meet. But these pools of money are available for what they’re available for. The works are usually (though not always) carried out by local tradesmen – a local economy boost and injection of new and transferable skills. I said funding had cleverly converged on the town, but it’s not serendipity. It took tenacity and vision to snare Berwick a share.

Come 2015, the current project will end. The conservation officer who made the bids and is overseeing and implementing the projects will be heading out of Berwick and back to County Hall – which will doubtless affect Berwick’s ability to benefit from other such schemes.

I’m sad about that. When we look back at Berwick’s scrapbook I don’t believe that the 2010-2014 Berwick regeneration will be considered a mistake. Or maybe I’m getting sentimental in my old age.

This article first appeared in The Berwick Advertiser in July 2013