This is a version of an article by me published on Voice of the North (VotN) recently. I’m posting it here in the interests of completion in terms of my thoughts on having cancer. Thanks to David Banks editor of VotN for the photo idea (his execution is way lovelier than my smeary snap!). 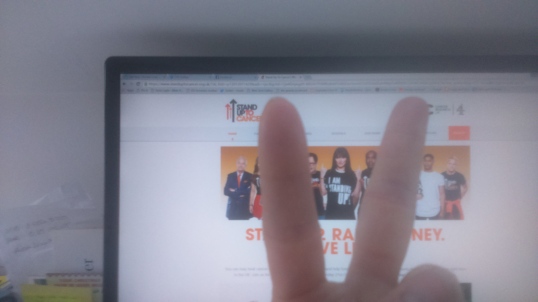 I’m increasingly overwhelmed and irritated by some of the viral and advertising cancer campaigns that inundate our daily lives. I didn’t think I’d ever jump on the Jenny Diski ‘don’t call me brave’ bandwagon. I thought it didn’t matter how others perceive you or the way you live through cancer. That’s up to them, I thought. However, the pigeonholing of people with cancer as universal footsoldiers in the eye of a horrific conflict is pretty unrelenting. Targeted marketing on social networking means that as soon as there’s a whiff of cancer about you, your timeline is dotted with ads and rallying cries from cancer organisations to fight cancer. And there are SO many organisations that it’s hard to make sense of what they all actually do, other than encourage us to part with our money.

And it isn’t just online: you can’t walk out of the door or turn on the TV without an advert, poster, or message about some aspect of the condition being presented to you. Advertisers (and friends and family, of course) are extremely keen to see you conquer the disease, and to battle on, showing how brave, inspirational, or indomitable you are. Sometimes it can feel as if it is your duty to deal with this feared enemy in a suitable way. A way that, perhaps, encourages others to feel that they would do the same in your shoes. Most importantly, you should strive to be among the percentage who conquer cancer and go on to live a long and cancer-free life. If you’re unsuccessful, it’s important that you exit this life at peace after your brief or long contest with the mighty demon cancer. It’s a big responsibility alongside feeling like shit!

Cancer, of course, is not simply one illness. It’s a multitude of illnesses linked by the fact that they all involve mutating cells in some form or other. Of course no one wants to have cancer but the reality is that one in two people are currently likely to get some form of cancer. So it’s not unreasonable to suppose it might be you. Obviously, I hope it isn’t you. Don’t get me wrong, our family has experienced many blessings through cancer (and cancer is a shared family experience), including feeling more closeknit, communicating more openly with each other and meeting some fab people. Personally, I relish each new day in a way that I hadn’t realised I didn’t do before. But, overall, having cancer and being treated for it isn’t much fun.

So, endless images and conversations that present you and the illness you have in a way that you do not perceive yourself gets wearing. At the end of the day, you have no choice about being someone with cancer. It’s part of life and you find the best way to live with it and through it. Of course it helps having people cheering and praying and encouraging from the sidelines – the support and care of all those around you is thrillingly life-enhancing. And, of course, those who have life-threatening or shortening illnesses are wise to remember how difficult it can be for others to express their support – being seriously ill can make you a bit touchy!

During my operation and subsequent chemotherapy for bowel cancer there was a particular advert on TV that at first grated and then just got me down. It was a man who shivered alone in an icy black and white wilderness, unaware of the people around him. Then a nurse from the particular charity joined him and everything became full colour and he was not so lonely. I can’t pinpoint exactly what it was that annoyed or upset me about the ad (although the fact that my 14-year-old had to leave the room every time it came on will certainly have been a factor) – to be honest it might just have been that it was there!

It is lonely having cancer: the realisation of its impact on your life and the lives of your friends and family isolate you in an inaccessible way. Thoughts of cancer run like a constant tickertape across your mind. When you’re cleaning your teeth, when you’re reading a book, when you’re chatting to someone and telling them how ‘fine’ you are: it’s always there – in the way I imagine tinnitus to be a constant and wearisome companion.

Perhaps the ads and campaigns, such as the recent viral tic on Facebook to turn your profile photo monochrome as a symbol of solidarity against cancer, are simply too in your face for those who have (or have had) cancer.  So I do have sympathy with the woman who was so incensed by the black and white profile pic thing that she took a selfie in a mirror (defiantly bare-breasted and nipple-less) flicking a V sign, to underscore her disgust at the simplistic and lazy idea that recolouring your picture will somehow show solidarity with those who have cancer – or, more importantly, do something to help or support them. Personally I have no desire to reveal my cancer scar – although I acknowledge that many find it cathartic. I also acknowledge that there are campaigns about raising awareness of particular cancers, encouraging people to get themselves checked out, offering support services, and raising funds to find better treatments etc. But I do think that marketeers have got rather carried away with themselves.

This morning it was Cancer Research that got up my nose with the following ad on my Facebook timeline:

Stand Up To Cancer UK

For too long, cancer’s been playing dirty. It’s been going after kids, targeting grannies… and even taking cheap-shots at our breasts and testicles. It’s time to rebel against cancer.

What does this even mean? I can’t believe that personifying cancer is useful in any way, shape or form. I don’t see cancer as ‘playing dirty’ and I don’t see myself as a ‘rebel against cancer’.  Have these money-raising campaigns lost sight of why they are doing this? Have they forgotten about the people with cancer and focused instead on an idealised picture of having cancer? Or have they got carried away with the sheer joy of being able to pop out to run a marathon, walk a mountain, fly along a zipwire, and the satisfaction of getting sponsored for ‘a good cause’ for doing it? I often wonder just how much these big organisations spend on communications and advertisements. How much sponsorship never arrives at the charitable destination of choice?

And I think that’s it: all the adjectives and hyperbole seem to me to be a bedspread under which the process of breeding money has become a self-flagellating dirty secret. Cancer fundraising is increasingly all about itself rather than about the reality of the people who are dealing with cancer – whether they be medics, researchers, care workers, people with cancer or their families. Whilst I applaud the idea of raising money to support good causes (and medical ones) on a large scale, I wonder if big charities need a reality check, time out to revisit their purpose and ethos.

I would suggest that it is on the local level that cancer support charities meet tangible needs at source. Here in Berwick, Berwick Cancer Cars (Berwick and District Cancer Support) ferry people the 80-100-mile round-trip to Newcastle-based hospitals. For someone undergoing radiotherapy, that’s a daily journey – often for six weeks or so. HospiceCare North Northumberland provides free support to patients, carers and families – and care in their own homes for those who wish to die at home. This is the up-close-and-personal end of serious illness.

I’m not saying we don’t need research, and organisations with a macro, nationwide and global view. I am saying that such organisations need to ensure that what they are doing is about real things; real people, and not just about raising money for the sake of it.