One week in = fun. But surely there aren’t enough vegetables for 51 more weeks?

Rather unexpectedly, the most difficult of my aims for 2015 during this first week, proved to be number two below. The residual exhaustion of the festive season and the fact that school term only started today may have something to do with my inability to rise early (oh and the fact that I set the alarm for the wrong day!). However, the morning I did manage to rise at 6am, I was rewarded by a glorious nearly full moon lighting up our still night-cloaked garden, the pleasure of making myself a warming fire, a cup of fresh coffee and the relief of ticking off two hours of Open University coursework. All before even a mouse so much as sneezed in the house. Result. I hope I can do it a few times more before the year’s out!

3. Take exercise on at least five days a week

4. Drink no alcohol on at least two days a week

Both the Husband and the 13-year-old have announced they are joining me in my folly (the veggie eating for both, plus the exercise and booze-free days for him). Though delightful to have company, it is perhaps a tad more challenging. Whilst I might choose a bowl of Tyrrells cheese crisps as my vegetarian supper, this just won’t wash as a healthy or sustaining repast for the family. Post-supper bolt-on, yes. But full-blown meal? No way. Plus, cooking vegetarian for a teenager who’s not totally over-the-moon about vegetables may prove tricky – although she was surprisingly positive about my veg crumble this evening (the Husband declared it ‘virtuous’ with it’s wholemeal & chopped almond topping and 10 different veg). There’s also the on-going debate about how pedantic to be about the vegetarian thing – is it so very wrong to have chicken stock in parsnip soup? According to some Twitterers it most certainly is, others are a wee bit more laid back…and, yes, we did have the chicken stock. But 52 weeks of being inventive with pulses and veg? I think I’m going to need substantially more recipes!

Vegetarian supper for one (perhaps with a glass of wine?)

Another area of on-going debate is what constitutes exercise. Does walking to the shop for instance? Or is that just part of daily life? What about sex (just kidding – of course it’s exercise!). The Husband was resistant to going out in the rain for a morning constitutional – but if we’re going to fit in five days of exercise…well, I’m going to have to be strict. Plus on that wet day we were rewarded by the most amazing rainbow spanning Berwick not dissimilar to the one here that I captured late last year. It’s great to reconnect with walks round Berwick and along the river and coast that were such highlights when we first moved here and that we have perhaps neglected more recently. This morning we even saw an otter eating a fishy breakfast on the lip of the river Tweed – it’s our first otter sighting in four and half years of living here. Brilliant. And it’s lovely to be enjoying some of the recently revamped park spaces. 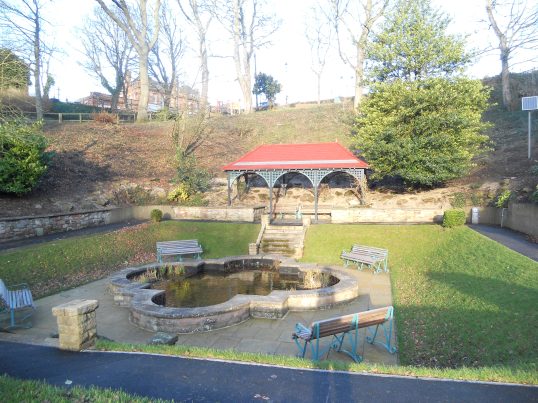 The refurbed lily pond and shelter near Berwick Station – no time for a rest for us on our punishing exercise regimen!

Finally, I haven’t really nailed down the keeping track of it all. Do I have specific days for each aim – you know: No wine Mondays and Tuesdays; no meat or fish Wednesdays and Thursdays; exercise Monday through Friday; up early Tuesday and Thursdays? Or do I leave it to chance and risk the end of the week arriving before I’ve managed to squeeze in my free-from, early rise, active days?

One week in it’s all quite entertaining. I have a sneaking suspicion it won’t last. Only time will tell.