A jolly good day out in Berwick

I do love a good day out. And if it’s a good day out just outside my front door, so much the better. And, my goodness, we’ve had a couple of great Berwick days during the damp, bleak month of June – both garnished with lashings of community spirit and, miraculously, sunshine.

I know many staunch republicans absented themselves from all things Jubilee, but I confess that, despite my ambivalence towards the monarchy, I enthusiastically embraced the opportunity to partake in a bit of neighbourly togetherness.

And, oh, what fun we had. The Parade was packed with all sorts: superbly priced, efficiently delivered, deliciously tempting sandwich and cake platters; a charity raffle; a mega inflatable slide; marvellous entertainment from Norham Brass Band (loved the Abba selection and can-can!), the mellifluous Mamatones, the anarchic Berwick Broadcasting Corporation, and much more besides. Families supped, chatted, laughed and sunned themselves. How idyllic.

The following week the Olympics, another event from which I’ve kept my eyes firmly averted, made its presence felt in Berwick’s sunny streets. Again, despite my misgivings about the corporate handcuffs applied to the so-called ‘People’s Olympics’, I looked forward to a second opportunity to gather with the good folk of Berwick to wave flags and enjoy bunting and laughter. 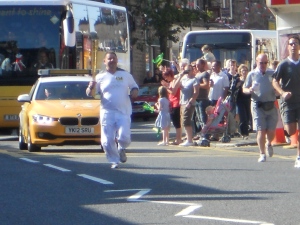 Two national events that, although perhaps not everyone’s cup of tea, prompted two brilliant community days. Days that left me with a warm glow about my adopted town and its ability to put on a good bash. When it counted, people flooded into the town, lined the streets, found places to park, walked to where they needed to go, chatted to each other and cheered each other on. It didn’t matter that our high street can perhaps seem a bit grim, or that the parking isn’t ideal: people came and enjoyed.

We, as a town, are rather good at this sort of thing – the party or festival that brings the community together, piques the visitor’s interest and makes them welcome. And it’s that ethos of the ‘good-day-out’  that might well become a unifying factor as we wrestle with all the various elements that conspire to make things tough for us – from devolved administration to economic constraints.

Our streets teem with people trying to make a case for improving Berwick’s lot – or simply improving it bit by precious bit. By the time this goes to print, the first Town Tidy Up of the year will have happened. Organised by Città Slow and Berwick in Bloom, supported by the newly formed Berwick Deserves Better – the aim is to tidy, clean, mend and paint community areas such as Eastern Lane by the Maltings, around the station and Castle Vale Park, and deal with graffiti in places like Woods Wynd. Meanwhile, the Town Team is busy polishing the second bid for Portas funding. Additionally, Arch (established by Northumberland County Council to stimulate regeneration and growth in Northumberland), is hatching a methodical approach to developing ‘a programme for Berwick which will make a significant contribution to competitiveness, place quality and sustainability, but which is also realistic, pragmatic and deliverable.’  Which, hopefully, will bode well for a number of prime redundant sites in Berwick, including the Kwik Save building.

So, let’s hope that, in time, such initiatives coalesce to make a lasting impact on the quality of life for those who already live and work in Berwick as well as those who visit. As one person I spoke to said: Berwick is a quality town. We have the history and heritage that makes people want to call in; we have the boutique B&Bs that attract people to make Berwick a base from which to visit other locations; what we need are the add-ons that make people who visit linger a while –  and enjoy a jolly good Berwick day out.

One thought on “A jolly good day out in Berwick”